The recipient of Utthan Samiti Award in 2018 and IBN 7’s Guru Shishya Awarded in 2012  with her renowned Guru, Padmashree  Anjolie Ela Menon,  Vimmi Indra is a well-known name in the field of visual art.

“It was really a great experience to live with internationally renowned artists including Padmashree Anjolie Ela Menon in Rashtrapati Bhavan for a week under the In-Residence Programme conducted by Lalit Kala Akademi, New Delhi held in 2019. My artwork received recognition from the Hon’ble President of India and now is a part of the Hon’ble President’s art collection at Rashtrapati Bhavan,” Vimmi Indra shares her experiences.

After a gap of more than two years of pandemic this is going to be her first solo exhibition.

In this show – CITYSCAPES exhibits birds as well as figurative works and full range of pen and ink as mixed media drawings.

“In this series of paintings, my CITYSCAPES set the background for exploring the different facets of being a human. On one hand, there are the indoor elements of a house – interspersed with emotive faces, which speak to our shared experiences of belonging to this world. On the other hand, birds fly over the city and its vastness, indicating the desire for freedom and a spiritual bliss. I see the balance of these two elements coexisting within all of us. My works are an expression of this,” says the renowned artist.

“Vimmi’s first exhibition titled CITISCAPES AS IMAGINED BY VIMMI INDRA was a sellout, featuring fairy tale buildings set against indigo skies. She soon revealed herself as a colourist. Her meticulous application of pigment and fine attention to details were noted. Now she comes back for her third solo with birds flying above the urban jungle, and figures making a gentle appearance for the first time, creating a new body of work.” says Anjolie Ela Menon, eminent contemporary Painter and Muralist.

Renowned art critic Uma Prakash says, “Indra’s works strike the eye and imagination for the sheer vibrancy of the images.  From the birds, CITYSCAPES to the nudes she unfolds a world that appears tranquil but evokes an inner rhythm and energy, and has a radiance of hidden gems”.

“Vimmi Indira’s work takes us to the horizon and beyond … the  flying bird … the beautiful mix of indigo mustard and red  is mesmerising … the art takes us to the  world of dreams … the old world charm … and the vibrant  mix of colours add to the narrative that the artist  herself creates  through her canvas .

Umang …  a  beautiful   collection of art works by Vimmi Indra dipicts the journey of the artist through her own very experiences… Her Persona and perspective is captured beautifully through the narrative  she  creates. Through these works… Through Umang, We present the very best of Vimmi Indra .  And the many moods of the artist are seen through both the CITYSCAPES and the Mother n Child Series,” says Amrita Kochhar, the gallerist, Navya Naveli Gallery, New Delhi and the Curator of the Exhibition.

Vimmi Indra studied BFA from Government Institute of Fine Art Jabalpur. She has conducted several solo and group shows in India and abroad. She lives and works in New Delhi. 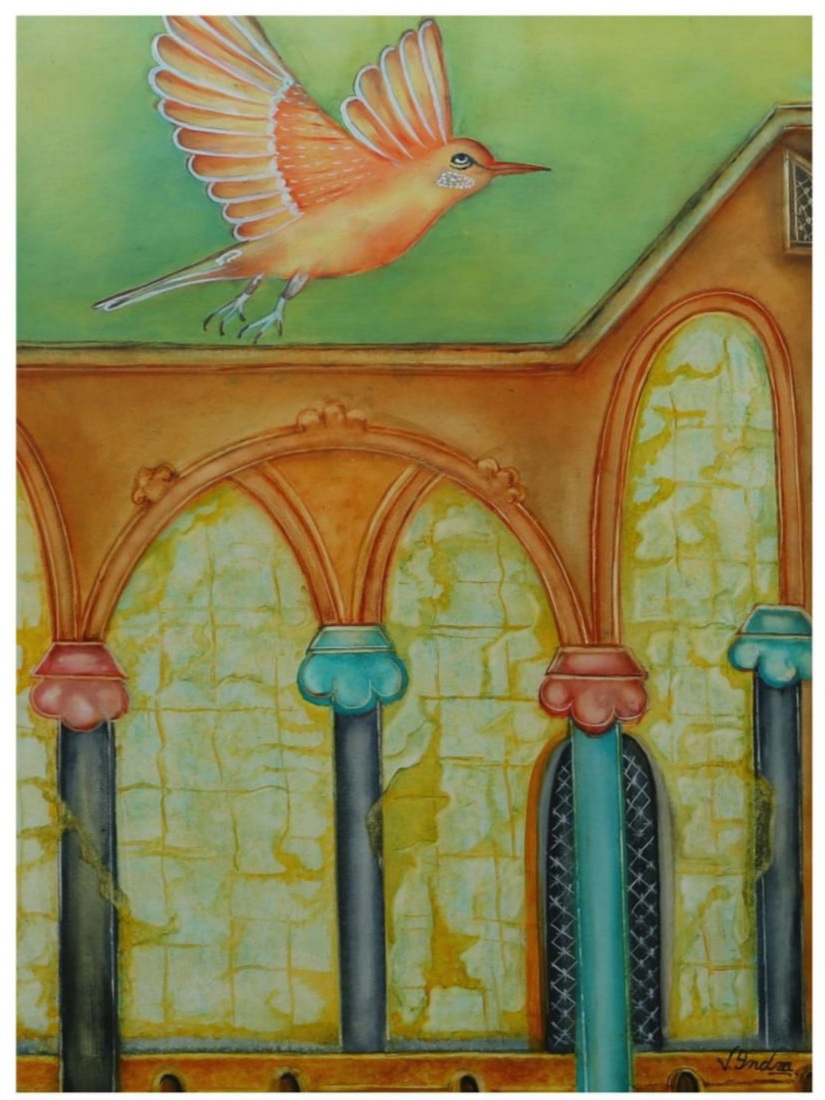 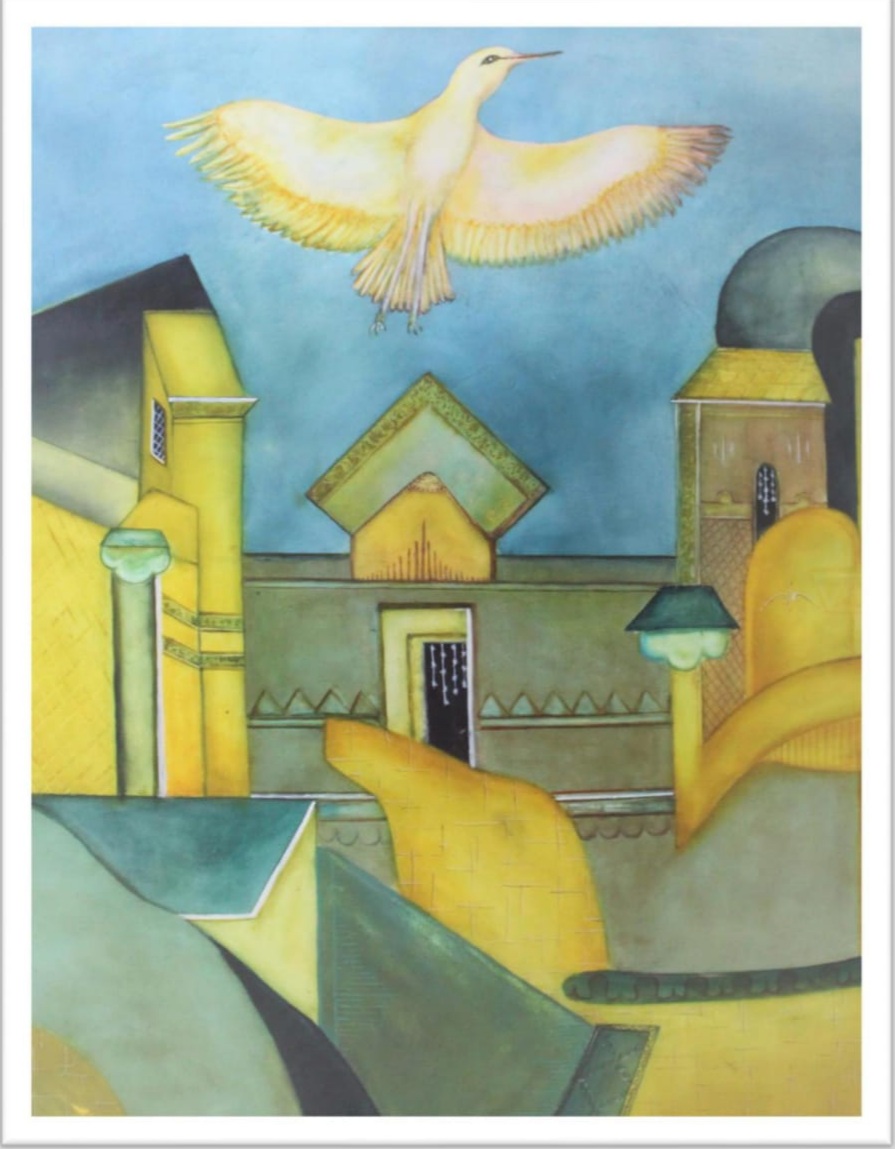 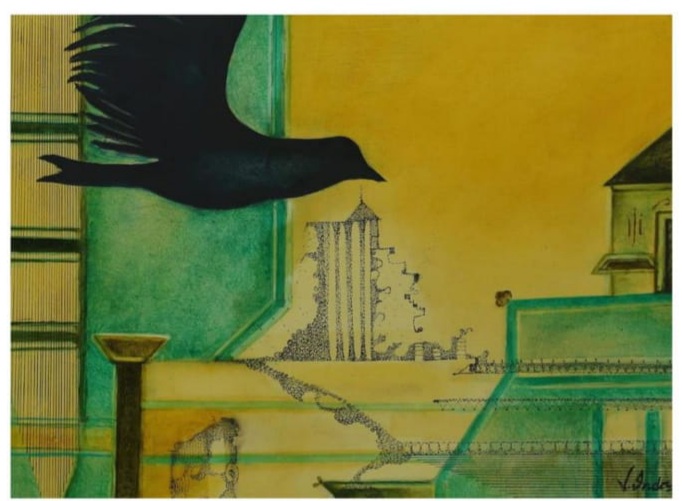 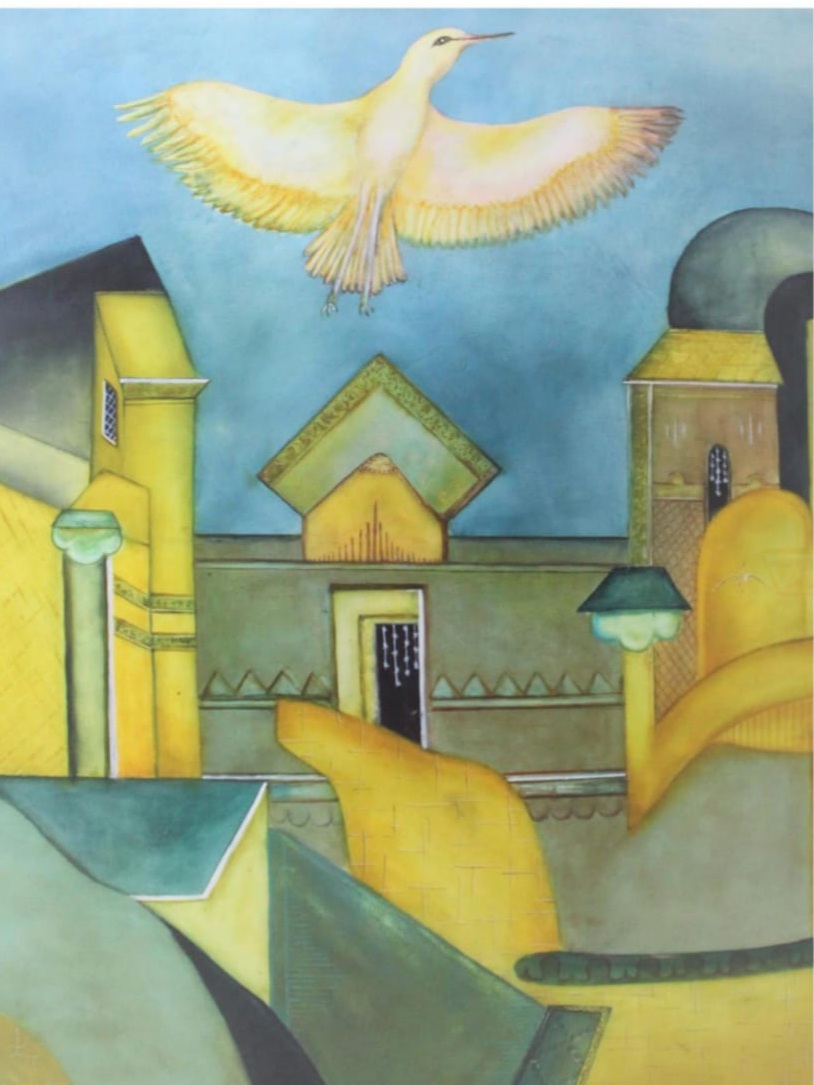 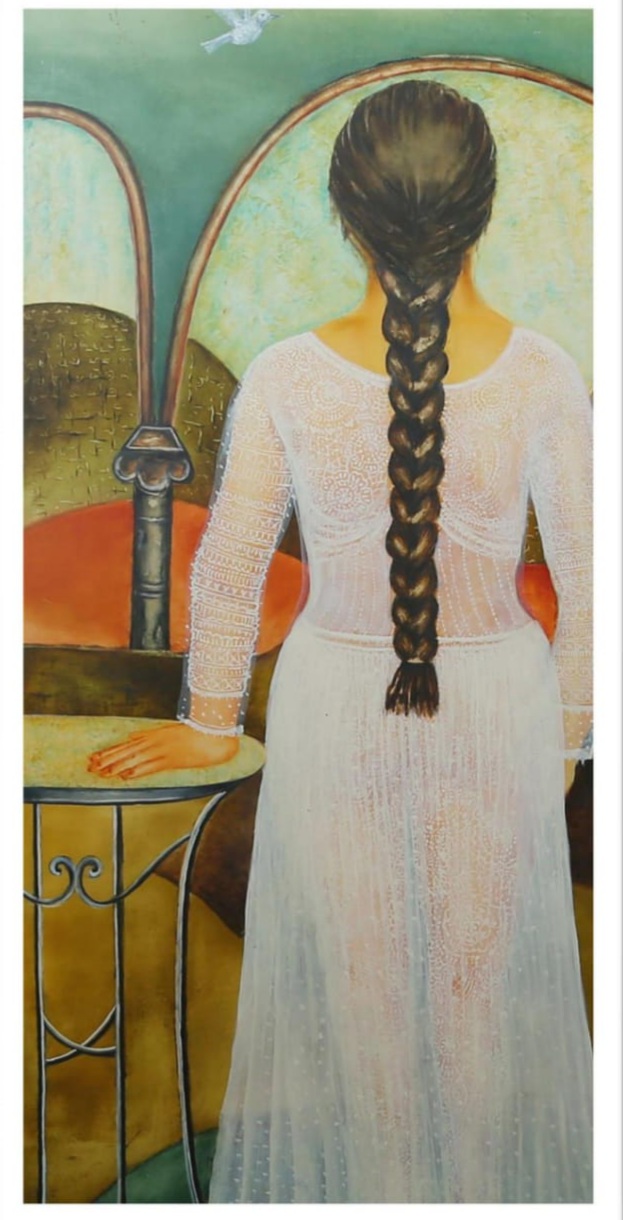 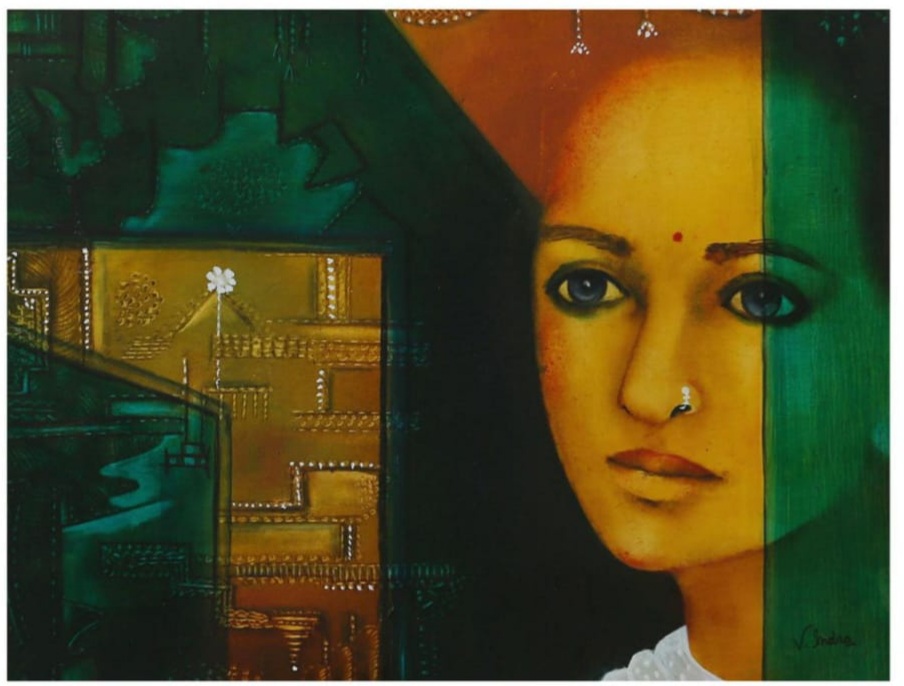 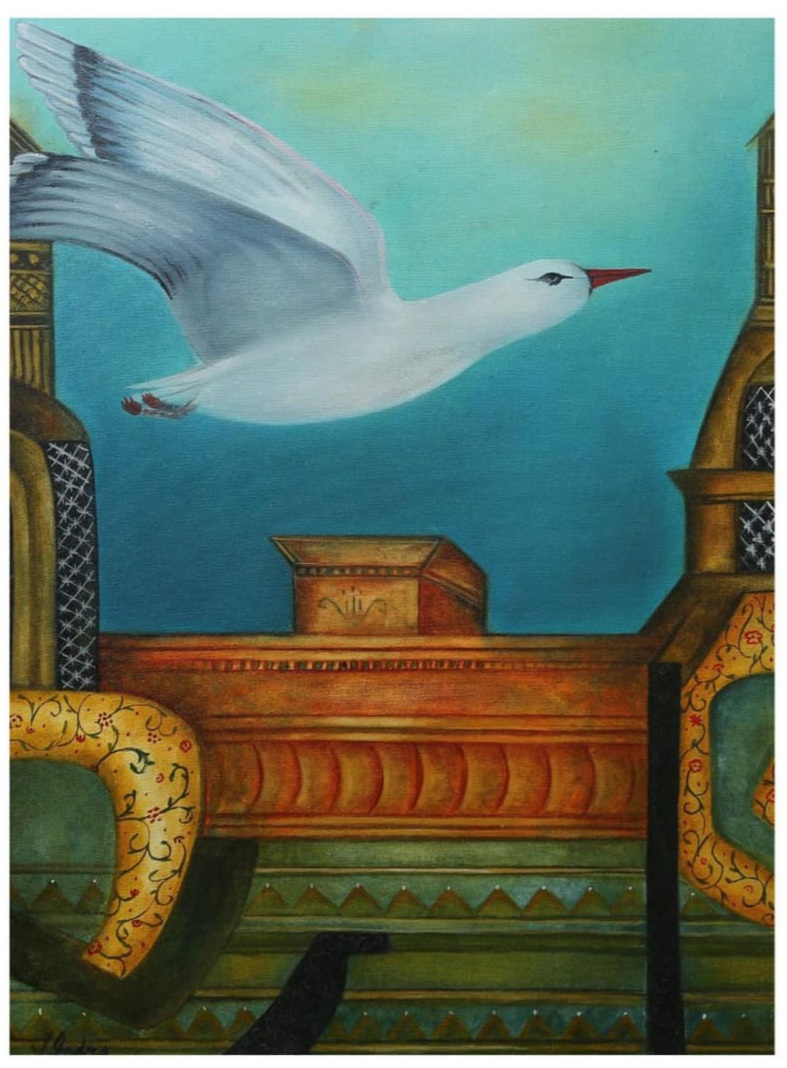 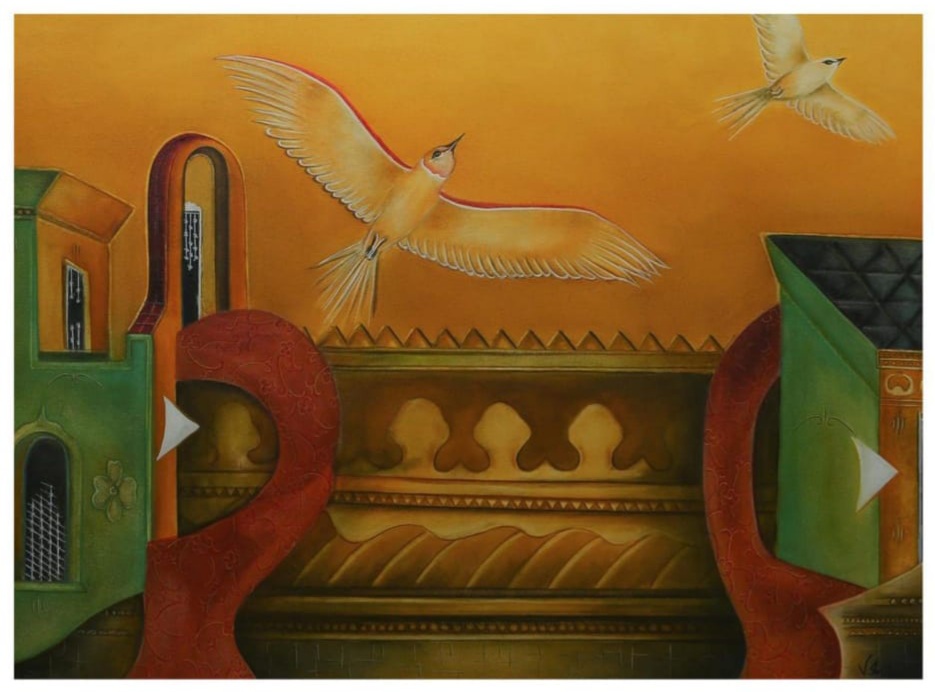