The Vande Bharat Mission – Air India Express  from Dubai overshot the runway and broke into two, killing 18 people including the Pilot and Co-Pilot, injuring 153 persons at Calicut International Airport.

The Boeing Aircraft, carrying 191 passengers including 10 infants and six crew met the accident while landing amidst heavy rain and poor weather conditions on Friday, 7 August at 7.45 pm.  The Aircraft failed to land on the table-top runway and skidded for more than 37 feet down.

As it was a repatriation flight those on board were returning home after being stranded for many months due to the Covid-19 pandemic.

The rescue operations were led by the disaster management team with the help of local voluntary persons and all injured persons were shifted to nearby hospitals in Malappuram and Calicut districts. It was only because of the instant timely support of the local residents in the area ensured minimum loss of lives in a disaster of such a magnitude. The rescue operations were completed in the shortest possible time rushing all injured to hospitals.

The flight data recorder of the Air India Express flight AXB 1344 was recovered as the investigation into the accident began. Normal operations resumed at Calicut Airport after the clearance received from the Directorate General of Civil Aviations taking into account all aspects of safety requirements in the Airport.

Air Marshal B.N Ghokhale, former vice-Chief of Air Staff, Indian Air Force had submitted a series of recommendations including avoidance of the downward slope in the overshoot area particularly on ‘table top’ runways and the need for a ground arresting system for aircraft, a visual reference system to alert the pilot while landing of the aircraft.  As per the international standards of the International Civil Aviation Organisation (ICAO), the Runway End Safety Area (RESA) of 90 metres is mandatory and 240 metres are recommendatory in table top airport operations, even though there is no such concept of tabletop  internationally. The ‘runaway overshoots’ occur sometimes, but an overrun by even a few metres will be catastrophic for table top runway landings. The DGCA has mandated a  Monsoon Minimum Equipment List also during aircraft operations. The Air Traffic Control (ATC) provides the pilots the weather conditions including visibility, rain and winds. In heavy rain, even if the runway is visible, due to sudden bursts of heavy rain or wind, the pilots are directed to divert the flight to nearby safer airports.

In Calicut airport, several recommendations of the Reports of 2011 and 2019 to improve the safety measures such as extending the length of the runway could not be materialised due to many reasons. However many safety drills were conducted in the Airport for assessing the preparedness in meeting emergency situations.  In 2012, a drill was conducted by the Active Network Group of Emergency Life Savers (ANGELS) in association with Airport Authority of India, IMA, Police Department and Fire and Rescue departments complying guidelines of the Disaster Management Authority, identified some of the areas in which attentions are to be given in meeting safety aspects during the drill. Similar drills in later years conducted for auditing safety situations with the participation of CISF also.   Such drills and preparedness proved beneficial to coordinate emergency technicians and medical teams to face the challenges effectively during the accident on 7 August night.

Investigation Reports were submitted to the government after the Air India Express flights from Dubai on 22 May, 2010 overshot the runway at the Mangalore Airport and on 4 August, 2017, SpiceJet flight at Calicut Airport skidded off with a miraculous narrow escape. After the Mangalore airport incidence, many recommendations were proposed by the safety committee.  In May 2015, in the wake of a Report on the Air India Express Boeing 737 crash at Mangalore airport, wide bodied aircraft were banned at Calicut Airport as the table top runway had only 2850 metres considering the safety norms. Later the approval had been obtained to benefit the lakhs of air passengers to the Middle East and restoration of Haj embarkation point to the Calicut Airport.  Now the Standard Operating Procedures (SOP) should be strictly adhered in the wake of the incident in the Airport.  Moreover, some experts have pointed out very critical safety lapses in different places, including cracks on the runways, water stagnation and excessive rubber deposits.

Several recommendations made for the Calicut airport in 2011 by the air safety committee were implemented, while a few could not be executed due to the lack of land availability. The Airport has undertaken a runway recarpeting and strengthening exercise during the 2015-2017 period.

The Civil Aviation Minister, Hardeep Singh Puri said at the Calicut International Airport on 8 August, 2020 that the investigation would reveal the exact reasons for the crash and all safety aspects of the airport would be addressed.

All apprehensions on various safety aspects in the wake of the overshooting of the table top runway by the Air India Express B-737 should be removed.

Calicut Airport was built on the top of a hilly area with the runways called ‘table top’ increasing the possibility of accidents. 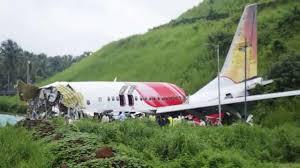 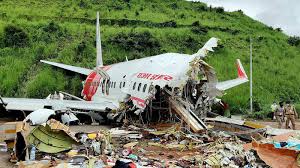