Again We lost our twenty brave sons in the eastern Ladakh. This time it is the Chinese troops after a skirmish in the darkness of 15 June,2020.The surveillance post set up by the Chinese army on a narrow mountain trail was the trigger for the clash in eastern Ladakh’s Galwan Valley in which twenty Indian soldiers killed. Indian troops headed by late Col B Santosh Babu, strongly objected to the post on the Indian side of the Line of Actual Control (LAC) along the banks of Galwan River that lead to hour long physical fight in the late hours of June 15.
‘’The Indian army is firmly committed to protect the territory and integrity and sovereignty of the nation’’, an Army Officer responded to the issue.
Immediately, Prime Minister Narendra Modi responded heavily in a public meeting that India would firmly protect every inch of the country’s land and its self respect. In the violent clash between India and China which left  Indian Army Personel dead in the Galwan Valley in Ladakh on 15 June,2020. Prime Minister conveyed strongly worded reaction to China.
‘’The supreme sacrifice of the martyrs  would not go in vain’’ and ‘’We have always worked closely with our neighbours in a cooperative and friendly manner…Whenever there have been difference of opinion, we have always tried to ensure that those differences never turned into a dispute,’’ Prime Minister strongly commented on the serious incidents.
In a strongly worded reaction External Affairs Minister S Jayasankar conveyed to his Chinese counterpart that the violent face- off  would have serious impact on the bilateral relationship.
Defence Minister, Rajnath Singh chaired the meeting of Chief of Defence and three Service Chiefs and given free hand to Forces to assess the situation on the ground and to take appropriate action as and when required in case of an escalation in the border.


Next day Prime Minister Narendra Modi called an all-party meeting to discuss the situation along the India-China border and informed that neither has anyone intruded into our territory nor taken any post.
On 23 June, the External Affairs Minister S. Jaishankar attended the Russia – India – China (RIC) trilateral Meeting along with Chinese Foreign Minister Wang Yi and Russion Foreign Minister Sergey Lavrov . The meeting was originally scheduled to meet on March 22, which was postponed due to Covid-19 pandemic. There in the RIC, a consensus was reached to disengage, and the modalities were discussed and will be taken in phased manner without giving a specific time frame. There would be more ground level talks in this regard.
Earlier this month on June 6, both sides identified five locations of conflict, the Patrolling Point (PP) 14, 15, 17A, North bank of Pangong Tso and Chushul  and agreed on “disengagement” in some other places also.
On May 5 and May 6 there were reports of stand-off with a scuffle in the Pangong Tso area, resulting in serious injuries on both sides. Many Indian soldiers were injured  including  a Commanding Officer who was air lifted to Delhi. On May 9 also there was another scuffle at Naku La. Commander level talks were initiated on June 6 and thereby  ‘’disengagement’’ was started in a phased manner following a series of talks in Galwan River area.
Prime Minister’s remarks on the issue was heavily critised by prominent political leaders including former Prime Minister, Man Mohan Singh. Man Mohan Singh  asked PM Modi to be “mindful”  the implications of his statement on national security and not allow them to utilise them to  the Chinese favour. “Disinformation is no substitute for diplomacy or decisive leadership. And the  truth cannot be suppressed by plaint allies spout comforting but false statement”. “ We cannot and will not be cowed down by threats and intimidation nor permit a compromise with our territorial integrity.’’
However the PM Office came out with a clarification that Modi talked in the meeting about the area where the Chinese and Indian troops clashed and how, because of the brave act of the Army, the Chinese attempt was foiled


The most basic policy of independent India was that of maintaining friendly relationships with neighbours, especially with China. There had been violent border skirmishes between the two countries after the uprising in Tibet. The grant of political asylum to spiritual leader Dalai Lama and after that in 1962, we have to face a war. But it’s a fact to remember that in those days it was Russia who supported us with advanced MIG fighter –aircraft to protect our 3225 kilometre long Himalayan border in Ladakh and across the McMohan Line. Britain and the US refused to support India in those days. But now it is pertinent to see those big powers are more lenient towards India but China plays a very psychological attempt to keep our neighbours including Nepal on their side.
In the past, many conflicts such as “Nathu La incident “and “Chola incident ” were reported and many stand-offs on the Depsang Plains in 2013and at Doklam in 2017 despite many high level meetings.  ”I never expected such a thing to happen. And the reason why I didn’t expect, ever since 1990, when India and China signed the Border Peace and Tranquility Agreement (BPTA), and there have been many agreements following that, certain operation procedures which are aimed at maintaining peace and tranquility on the border.
Now they have moved forward with large troops and placed embarkments, gun placements, observation towers.
To address what is happening on the border, We should keep a very strong military posture and discussions at  diplomatic levels.
It is seen that armed forces were kept on alert along the LAC following the clash.’’ Gautam  Bombawale, former Ambassador to China was very critical on the issue.

On the economic front, though there seems to be a strong feeling to boycott Chinese products, we are heavily dependent on the imports of  pharmas  and electronic components from China. Nearly 70 % of antibiotics are imported by India from China. Many Indian start ups have Chinese investments. In Financial Year 2019, India exported nearly 5.1% of total exports whereas it was 3% for China. Also 13.7% of India’s imports were from China, but for China it is only 0.9%. In Financial Year 2020 the exports to China reported over 5% of India’s exports. It is the third highest export registered until February 2020. India’s top  imports  are from China, US and UAE whereas the top exports took place in US, UAE and China.These economic factors are important in redrawing the relations with any countries in the coming post pandemic scenario.
But even after a series of discussions, in eastern Ladakh, military preparations are being built up for another transgression and skirmish. Expeditious restoration of peace and tranquility on the border line should be the most priority. 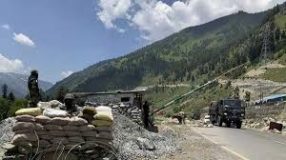