The political battle in Bihar has heated up.

The Chief Election Commissioner Sunil Arora announced the general election in Bihar and will be held in three phases.

Altogether there are 243 seats in Bihar State Legislative Assembly.

Many mainstream media and experts have started comparing  Nitish Kumar’s rule with that of Lalu Prasad’s and wife Rabri Devi’s.

Nitish Kumar has ruled Bihar for 15 years now. Still Bihar’s villages are notorious for crimes, murder, kidnapping and rapes. The reasons for the increase in crimes are many; some argue that it’s because of higher registration of crimes online.

However Bihar continues to have a high number of crimes and now there is unemployment and reverse migration of workers due to the pandemic.

RJD leader and the Chief ministerial candidate, Tejashwi Yadav released the election manifesto in Bihar and promised 10 lakh government jobs to the youth.

The ruling Janata Dal(U) has launched its own manifesto for the coming election promising improved technical education and sops for women in the state. It is announced in Patna called Saat Nishchay II, a separate manifesto from its alliance partner the BJP. But BJP manifesto speaks specifically of creating jobs but the release of the Manifesto was vehemently criticised by all opposition parties as it was allegedly connected with the supply of free covid vaccine in the State. Union Finance Minister Nirmala Sitharaman released the manifesto in Patna on 22 October and said that as soon as a Covid -19 vaccine is available for production on a mass scale, every person in Bihar will get free vaccination. The announcement led to a storm of criticism as promising free vaccines as poll promises during a pandemic was morally incorrect. It seems to politicise a public health issue that affects every state.

The senior leader of the prominent opposition party RJD who runs the mahagathbandhan along with Congress and other left wing parties in the state protested.

“The vaccine belongs to India and not to the BJP. The politicisation of the vaccine proves that they have no other option except the fear of the disease and death.”

Senior RJD leader and party spokesperson Manoj K.Jha is of the view that across Bihar, RJD leader Tejashwi Yadav is drawing a large interactive crowd and there is an anti incumbency  factor all over the state.

In the last election, Janata Dal (United), Rashtriya Janata Dal (RJD) and Congress under the banner of Mahagathbandhan won against the alliance NDA led by BJP along three smaller parties, Lok Janshakti Party, Rashtriya Lok Samata Party and the Hindustani Awam Morcha.  In 2017, the JD(U) shifted alliance to NDA causing the fall of Mahagathbandhan government and NDA came to power under the leadership of Nitish Kumar. In 2018, Rashtriya Lok Samata Party and Hindustani Awam Morcha left the NDA alliance.    In 2020, during this election, Lok Janshakti Party of Chirag Paswan is fighting against the NDA partner JD (U) in all the assembly constituencies but declared that it has an alliance with BJP at national level and is ready to form government with BJP in Bihar.   LJP and JD (U) are expecting votes from certain sections of lower sections of society in Bihar.

There are nearly 120 unrecognised registered political parties in Bihar.   Many coalitions and alliances such as United Democratic Secular Alliance(USDA), Progressive Democratic Alliance (PDA), United Democratic Alliance (UDA) and alliance of Rashtriya Lok Samata Party, Bahujan samaj Party and Janvadi Party (Socialist)  have been emerged with marginal impacts in some areas in the state. Parties like Shiv Sena, Jharkhand Mukti Morcha are also actively participating in the fray.

In this election, issues are many including national protests on Agricultural Bills passed by the Parliament, alleged politicisation of  relief given for 2019 Flood, migrant labour crisis, unemployment problem,  closure of industries and the recent issues in handling of Covid-19 pandemic in the state.

Most of the issues are related to the governance, but nobody can predict the poll outcome in Bihar.

But this time Tejashwi is more loud and pulling the crowd.

Chirag Paswan seems to be the game player and BJP holds the card more close to their heart.

The oppressed, marginalised and caste politics will determine the prospect of Bihar in coming days.

Covid-19 pandemic will also be expected to make an issue in this election.   The invisible pandemic needs to be seriously tackled.

The rallies, demonstrations, media interviews, gatherings are to be guided by the covid-19 protocols issued by the authorities. Otherwise there will be yet another catastrophe in the urban and rural areas of Bihar. 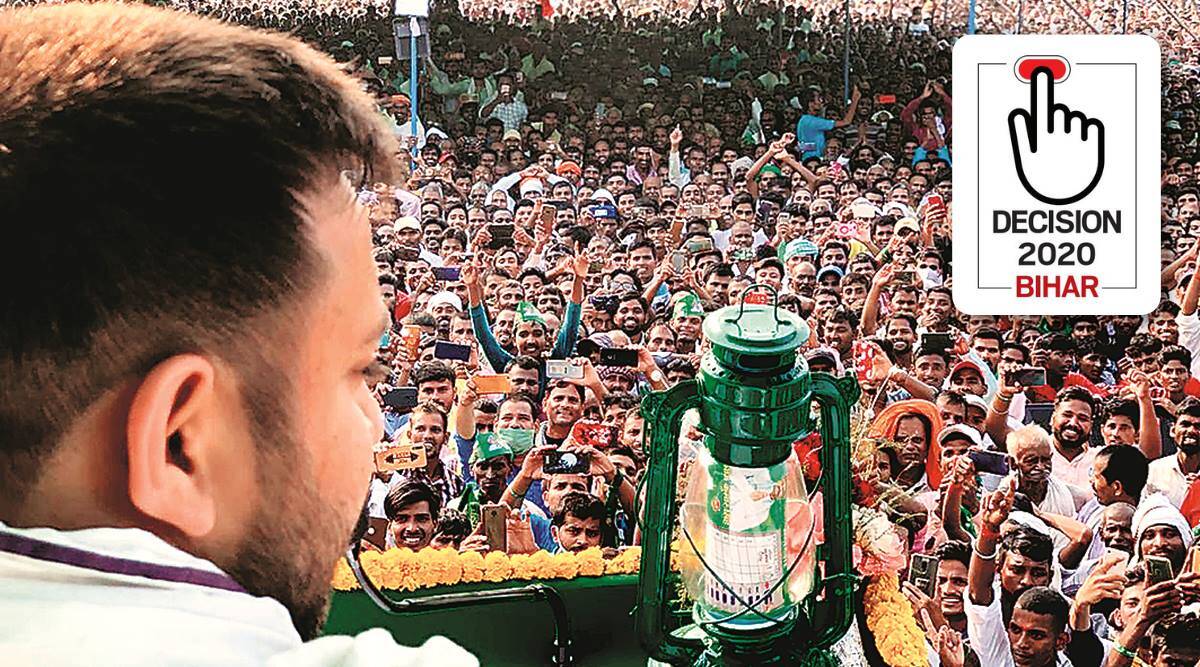